History of the Allen Church 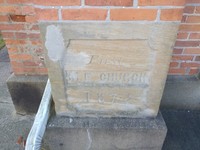 The first public building to be erected in Allen Prairie, later to be known as Allen, was a log schoolhouse.  In this building, the Allen Methodist Church was first organized in 1833.  The present church now stands on land purchased by the Board of Trustees for a meeting house in 1859.

In 1865, Alleen Circuit was organized with the Rev. E. Hunt as its first pastor.  It originally formed a part of the Jonesville-Litchfield Circuits.  In 1867, members of the church purchased a parsonage for about $600.00.

In 1912 during a fierce electrical storm, lightning struck the steeple of the church and resulted in a disastrous fire.  By the time it was discovered, there was no chance of saving anything.  The present church was built under the direction of Rev. Bedford in 1913.

On June 6, 1955, Mrs. Wilson, who lived next door, noticed a flickering light in the church and upon investigating, found it on fire.  Repairs and decorations at the time cost $3155.42 which was covered by insurance.

In 1956, an electric organ was purchased.  In 1961, a well was drilled and water was piped into the kitchen.  In 1961, gas was piped into the church and a unit installed in the chapel.  In early 1964, a gas unit was installed in the basement.  In the fall of 1991, the pews were installed to replace the opera-style seats.  We broke ground on the 12th of July, 1992, for our Peace Pole.  Over 80 different pastors have served the Allen Church.  During those years, from 1833 to 1992, the church has been on different circuits as well as being a single charge.  At the present time, Allen is served by Pastor Larry.